What is a Chautauqua 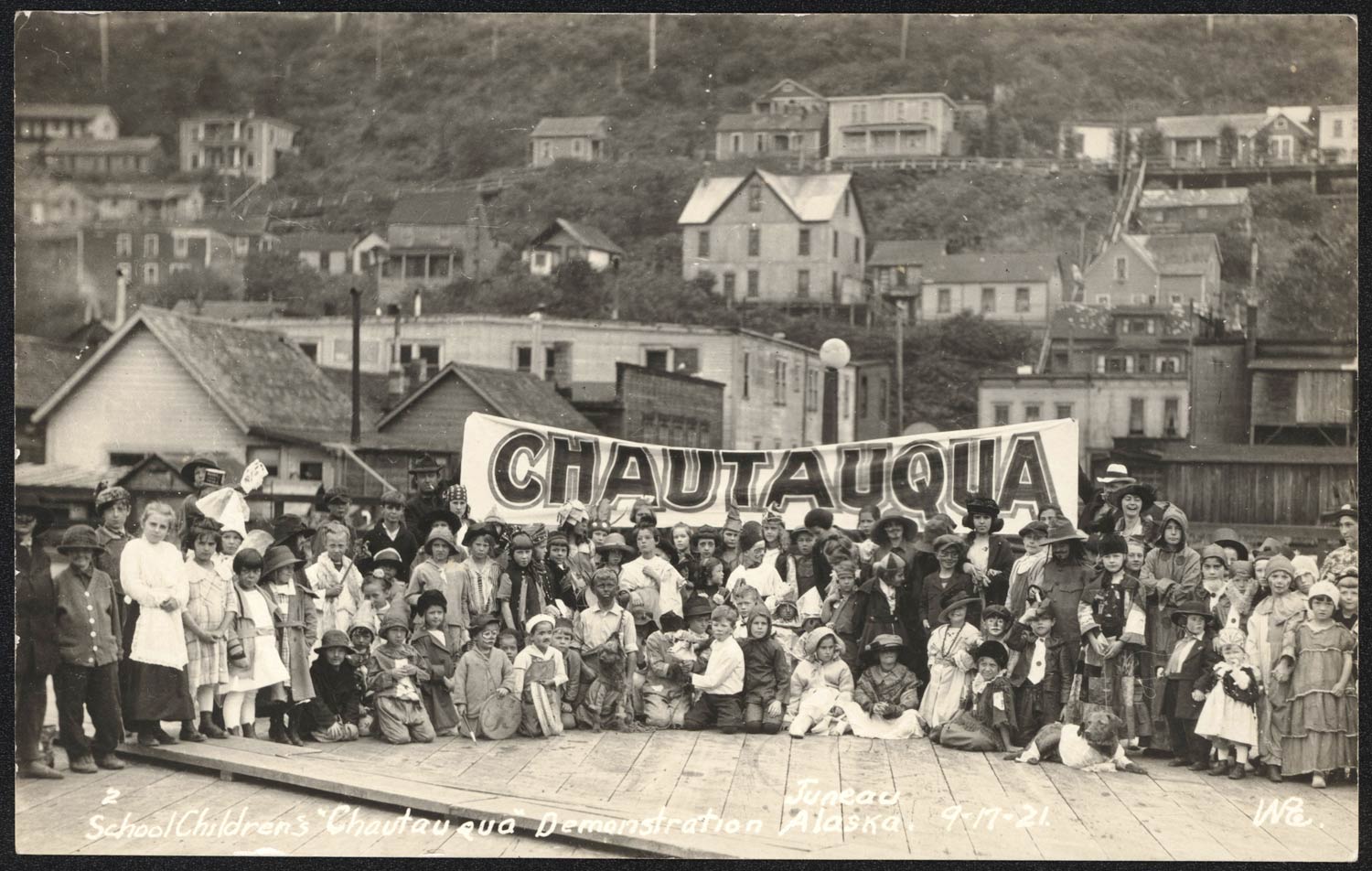 “Chautauqua” was a cultural and social movement that started in upstate New York in the 1870s and flourished until the mid 1920s. During this time, hundreds of touring chautauquas presented lectures, dance, music, drama, and other forms of “cultural enrichment”. In rural America, big tents served as temporary theaters for these productions. Lectures by author Mark Twain, suffragette Susan B. Anthony, or a production of “The Tale of Two Cities” are the kinds of entertainment one could expect at a chautauqua show. The Chautauqua Institution still thrives in Chautauqua, New York.

Teddy Roosevelt once called the traveling Chautauquas “the most American thing in America”. This form of live entertainment faded with the growing popularity of radio and motion pictures.

The Chautauqua Movement was the largest event that has ever existed in the US or Canada. Taking its cue from the proceeding Lyceum movement the first Chautauqua was held on idyllic Lake Chautauqua (hence the name) in 1874. Its mix of arts and entertainment became an instant hit. By the turn of the 20th century there were Chautauquas held one coast to the other. In 1904 the Chautauqua idea got on the rails and went mobile. Held in large brown tents Chautauquas were found in nearly every town in the country. Powered by its superstar speakers, international music stars, theatre, vaudeville, scientists, and politicians it had become a sensation. By 1924 a 1,000 Circuit or Traveling Chautauquas were playing in over 10,000 towns with an attendance of over 40,000,000 Americans. Teddy Roosevelt called Chautauqua, "The most American thing about America". Chautauquas were based on the idea that learning continued throughout life. The Chautauqua Movement's mix of education and entertainment was the predecessor of today's NPR, TED talks, and influenced modern journalism, television, and politics. Chautauquas were always set in an idyllic setting, among the trees, by a shore, or in a park (which is why this 2016 WSP summer is such a natural fit). When Chautauqua came to a town all normal activity stopped as each town's citizen's dedicated a week of their lives to learn, to be entertained, and to join in community.

The traveling Chautauquas disappeared during the Great Depression but the original Chautauqua continues to flourish on the shores of Lake Chautauqua.

"Chautauqua: An American Institution Reimagined for the 21st Century," by Marshall Gause on the website progrss, lays out both the history of Chautauquas and which ones are currently active around the U.S., including New Old Time Chautauqua.

CIRCUIT CHAUTAUQUAS IN WASHINGTON 1914-1930:
For a week every summer, from 1914 until 1930, Dayton, WA was invaded. All activities in Dayton and the countryside around were curtailed or reduced. The hotels began to fill up with strange people who had arrived by rail the night before.

Some of these strangers were people of note: politicians, lecturers, inventors, and educators. To this heady cast was added vaudevillians, divas, dancers, Native American Speakers, and actors. The local newspapers headlined the week-long program by printing the schedule on the front page with descriptions of each of the acts. It was the area’s biggest week of the year. What was it?

It was the Ellison-White Traveling Circuit Chautauqua and it was part of the national Chautauqua movement which had become the largest attended event in Washington State. In its heyday, the importance of Chautauqua week in Dayton’s yearly cycle was right up there with Christmas, Easter, and the Fourth of July.

NOTC's appearance in Dayton is historic as this is the first time in a century that the movement has returned here.