The Hands Across the Border Project evolved from four previous trips taken by The New Old Time Chautauqua to Blackfeet Nation in Browning, Montana. For two weeks in June, 2017, our fifth journey proved to be both memorable and extraordinary. A review from Shannon Moon, Chris Bricker, and Joanne Murayama.

Typically, The New Old Time Chautauqua, NOTC, follows a fairly set format for its summer tours. The average stay in any location is three action packed days consumed with a tight schedule of community shows, a marching band filled in with costumers, jugglers and other vaudevillians, a community potluck and also a wide array of workshops. We try to devote time and energy to community service, whatever is most needed.  And each visit's climax is a big vaudeville variety show, the proceeds of which are almost always returned to the community that sponsored our stay. This is what we’ve done in the past, a very fast paced formula for interaction with our host communities, the goal being to open avenues of communication and ignite hope for healing and positive change.

Hands Across the Border Project was a unique and different journey. The people involved made a conscious decision to “stretch” our comfort zones, to innovate with fresh and open minds, in order to establish a collaborative and synergistic relationship with the Blackfeet Nation in Browning, Montana and the Piikani Nation in Brocket, Alberta, Canada. To do this, we had to break down that “fourth wall” between Chautauqua and the audience in a way that had never been done before.

There were a number of meetings with Blackfeet and Piikani Nation leaders. In April, we were honored to host a meeting in Port Townsend, Washington with Piikani Chief Stanley Grier, and Council Secretary Barney Provost; Blackfeet Council Secretary Tyson Running Wolf, elementary school educator Lona Running Wolf and tribal member Alan Racine. We took time for introductions and shared what we each might have to offer. We listened attentively and openly to all ideas and input. During this opening, we became familiar with each other as individuals and as groups; common ground was established from which evolved common goals. We covered logistical planning and roughly sketched out five days of activities for both the Montana side of the border, and five days of activities on the Alberta side. It quickly became evident that this process was as significant as the outcome. 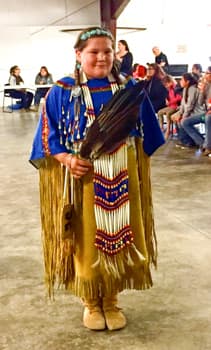 Our hope was to become a customized catalyst to link First Nation Peoples (Piikani Nation) and Native American Peoples (Blackfeet Nation) that have been historically separated by a border not of their own making. Together, we found creative ways to integrate talent, history, music, humor, culture, curiosity, tradition, knowledge and education through a meaningful series of events. Tribal members & Chautauquans became The Hands Across the Border Project—we carefully collected the stones and thoughtfully started placement for building a metaphorical bridge for reconciliation, friendship, healing, hope, fun & laughter...a safe place for all to cross into a brighter and healthier future.
Godfrey Daniels and friends in Browning, MT, & Young Blackfeet dancer in Browning, MT

At the Blackfoot/Blackfeet Nation's invitation, The NOTC became more than an eccentric parade, so much more than a variety show. Instead we were actual active collaborators, service workers, allies, and messengers.  On this visit, those Chautauqua veterans from past trips witnessed new generations of Native American leadership who have returned to their communities to serve and build with their experience, skills, and wisdom.

Over the years there has been an increase of infrastructure—a hospital and a Blackfeet Community College in Browning, to name a few. A homeless shelter in Brocket that addresses multiple needs through community collaboration such as domestic violence, addiction and PTSD, along with a wide spectrum of social advocacy programs that have evolved over recent years. The focus on the children, on fostering Native identity, spirituality and ensuring the survival of their language and stories...all this could be felt on a visceral level; the hope and dedication was palpable, truly inspiring each of us outsiders to give all we could possibly offer.

There was a street dance, an amazing, fun and moving talent show for whom each kid that participated received a prize of their choosing. There was a parade featuring Chautauqua’s band with a slew of kid marching alongside us, followed by a hundred horses and their riders arriving from all four directions in support of the fight against cancer.

There were major community service projects, forums, games, a fry bread/chili cook off, a concert/show for a few busloads of school kids, a Pow Wow, and a salmon feast. Collectively, with proper guidance and assistance, we built a sweat lodge and were honored to be part of a traditional meaningful and cleansing sweat. The Elders told their stories, and the youth shared their hopes, their smiles and laughter.

By the Chautauquans joining in with local events, providing flexible, impromptu and expanded workshops and diving into extensive community service projects, there were ample opportunities for sharing, bonding, mostly listening and learning more of the historical and cultural heritage of The Blackfoot/Blackfeet Nations. For ten days we joined with the Blackfoot Confederacy in conversations about subjects most often and for too long left out of the popular narrative, the truths and details never taught in traditional American school curriculum. There were forums and talks given by members of the Blackfoot communities that included the Border & Treaty issues and Intergenerational Trauma. There were lengthy discussions with elders who lived through the horrors of being abducted as children and taken to the boarding schools, many of whom did not survive. Personal, multi-generational stories and songs were shared around campfires and during the day, in shelter of the tepees we were taught how to properly erect by some patient Brocket Native community members. The learnings and gifted time were invaluable treasures given to us. What an honor to sit amongst these heroic people, to be welcomed onto their land, to have the opportunity to listen and ask questions by those that continue to survive, their wisdom and strengths immeasurable.

Above: Browning's Talent Show First Prize winner of a beautiful mountain bike donated by The Recyclery in Port Townsend, WA

Through invested time and collaborative action, we proved our good intentions were honorable and true. As our relations with First Nation People expand and deepen, the trust grows ever stronger with our Native American brothers and sisters. Why is this so significant?  Because we place ourselves in a position to push back with a mighty force those that threaten territories, defy sacred places, break or blatantly disregard treaty agreements, and ultimately desecrate the good earth and life-giving waters that sustain us all.

If Standing Rock, The Civil Right's Movement, The Vietnam Anti-war Movement taught us anything, it is the power of numbers, the power of being spiritually aligned and the importance of true and faithful alliances. Also, that each of us individually, can accomplish positive change. However, our efforts must be continuous and vigilant. We are all of the same species, and we must continue to work together with passion and due diligence. Hands Across the Border was an immeasurably successful project. Very real and personal relations started to solidify; budding trust and promising bonds were made. We have only to continue forward and onward with our commitment to each other, for the greater good of the collective whole.